Category Archives: Astronauts in the News 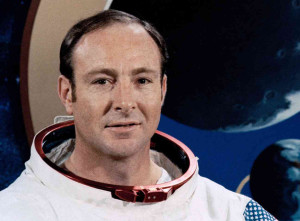 Space Fan February 5, 2016
Sad news in the world of space travel: Apollo 14 astronaut Edgar Mitchell has died at the age of 85. The US astronaut was the sixth man to walk on the moon and was the last surviving member of the Apollo 14 mission. He died on the eve of the 45th anniversary of his mission to the moon. Read m [...]
Astronauts in the News Read More